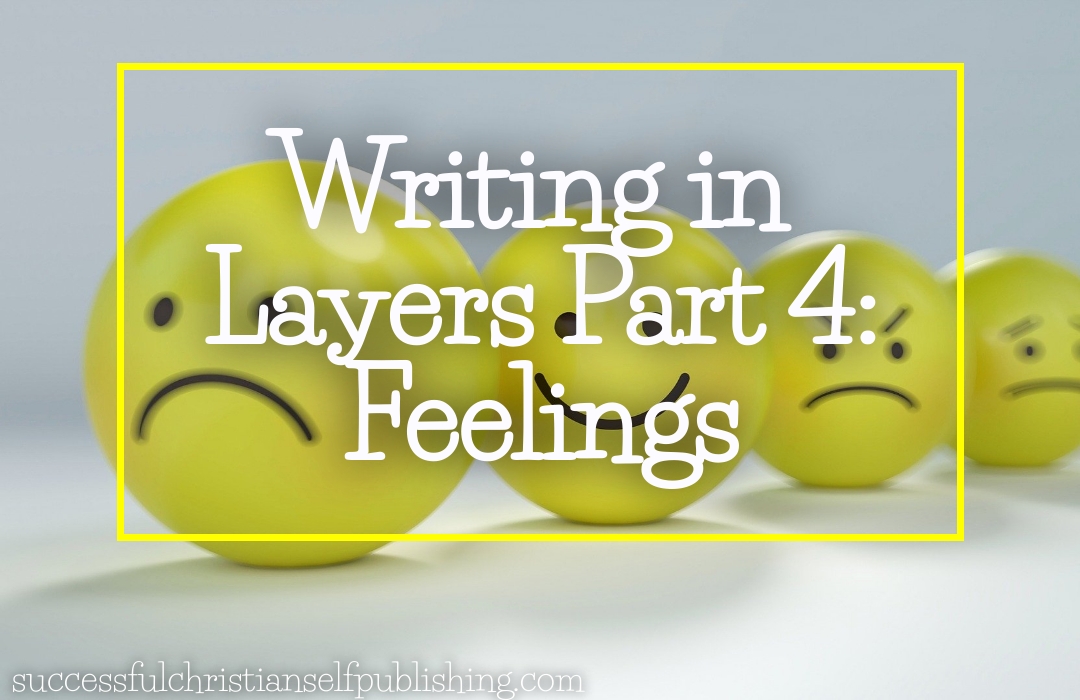 After going through and adding all of the thoughts, it’s time to add the feelings. Feelings take a little more work, because of that whole “show don’t tell” rule. Instead of saying, “She was scared,” it’s going to be important for me to show how scared she is with a playing of her thoughts, feelings, and physical actions.

Remember the few paragraphs I shared with you from my current work-in-progress last week?

Her head pounded.[Describe the waking up in a hard chair with her hands tied behind her and originally trying to shift to get more comfortable because her head hurt really bad]
When she realized her situation, she kept her eyes closed and try to assess anything that she could in her environment.[She heard movements] etc.
Adrenaline skittered through her system, making her hands tingle and sweat beaded on her upper lip. She could feel Jack move and tried to turn her hand to touch his palm. He stilled at her touch.

The thoughts I added are in blue. Let’s add feelings in purple.

Her head pounded. Nausea rolled in her stomach. Why did she feel so terrible? She tried to roll over, to get more comfortable, but couldn’t move her arms. What in the world? Some fog lifted and she realized she wasn’t in her bed. Instead, she sat on a hard chair.
In little flashes, she started to remember. Driving up to that house. Asking the who answered the door about Cisco. The flash of pain. Then…nothing. Her heart started beating a little faster. Sweat beaded her upper lip. With a skittering rush of adrenaline, the grogginess got pushed to the background and every sense heightened. What to do now?
When she realized her situation, She kept her eyes closed and try to assess anything that she could in her environment. The smell of damp earth in the cold air assaulted her nostrils. Her shoulders ached from the position of her hands. Something sharp and unyielding kept them clasped behind her. Maybe a zip-tie? A shuffling noises came from her left, the click of a switch a split second before a flood of heat. Behind her eyelids, she could see the bright light shining.
Footsteps. Low voices coming from her right.
Movement behind her, against her.
Adrenaline skittered through her system, making her hands tingle and sweat beaded on her upper lip. Then it occurred Her arms were tied to someone else. Jack? It must be Jack. Relief almost made her cry out. Jack! She wasn’t alone. Praying desperately for courage and wisdom, she tried to listen to the low voices, tried to make out words. He started struggling, making her bounds dig more into her wrists. She fought back the discomfort and worked against the tight binding to turn her hand, pressing her palm against his. He stilled at her touch.

You can see where I added the smell of the earth. That would normally be part of the scene setting, but because the scene setting helped accentuate the emotions (the smell assaulted her nose) I went ahead and added it because I thought of it as I was going through.

I told youabout the notepad I keep to jot notes to remind myself about certain things. I might check the notepad now and make sure there wasn’t a thought or a situation or a life event she could pull into the scene I just finished.

I’ll now go through the entire book, from Chapter 1 to Chapter 30, and add in all of the thoughts. This is a little more methodical than the quick push of the action and dialogue, and more careful than adding the thoughts.