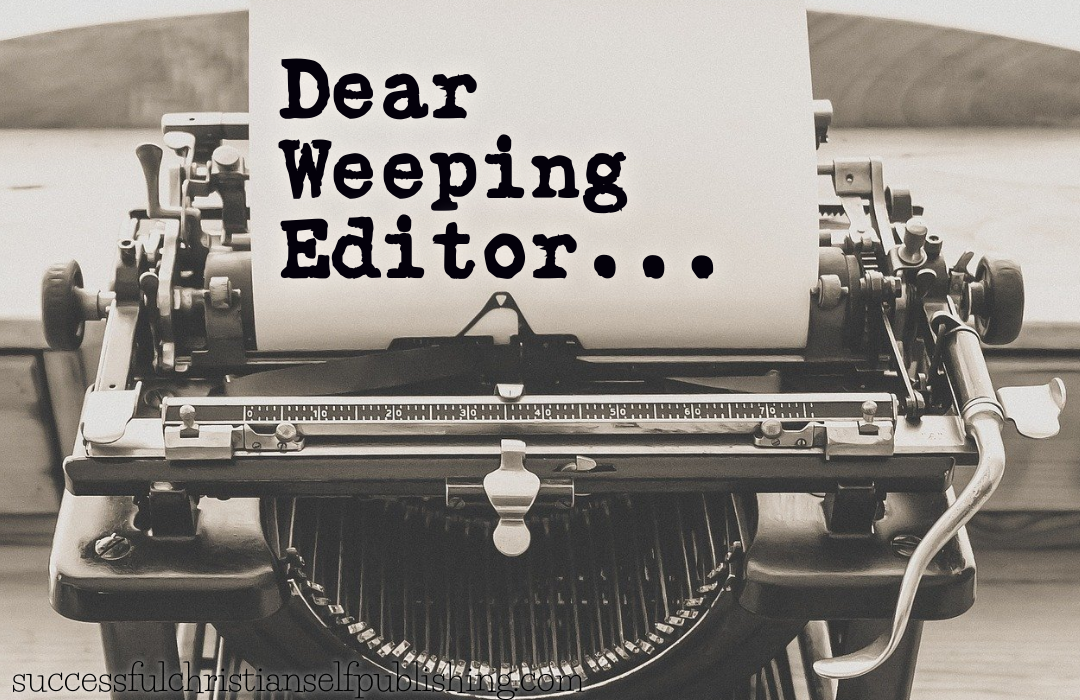 Dear Weeping Editor,
Until I started reading your Sunday column, I had only ever heard of five senses. I only knew of The Sixth Sense as a Bruce Willis movie.
Can you tell me more about the proprioception sense and the vestibular sense you mention? And maybe how I should include them in my writing?
Signed,
Emma Knight Shyamalan

Thanks so much for the email. I have to admit, I was in the same boat as you for most of my life. It took my special needs son coming into the world before I understood that we have more than 5 senses, and it seems like he was born not so long ago. Anyway, I am happy to share what I learned about these mysterious sounding senses, and how we can apply them to our writing.

When we talk about senses, we usually mean the five traditional ones: sight, smell, hearing, taste, and touch. But there actually are two other senses. These sixth and seventh senses control body awareness (proprioception) and balance and spatial orientation (the vestibular sense). Readers want to experience all seven senses along with your characters. Good writers include these sensory details in ways that actively envelop the reader, not in ways that pull the reader out of the story.

Proprioception, also sometimes called “kinaesthesia,” is the sense of self-movement and body position. It’s our awareness of exactly where our body parts are in relation to the elements of our environment we must interact with, and this informs us how much or how little force or energy to exert. It is sometimes described as the “sixth sense”.

Since I doubt that cleared anything up, we all have receptors in our muscles that tell us where our body parts are. For example, if you raise your hand, you know that your arm is over your head. You don’t have to think about it or look in a mirror. People with poor proprioception, like young children or people with sensory disabilities, may think their arm is over their head when it’s really straight out in front of them.

Proprioception enables a man (or woman) to close his eyes and touch his nose with his index finger. You know where your nose and finger are. It allows us to know whether we are standing on soft grass or hard cement without looking and even if we are wearing shoes. More examples would be balancing on one leg, throwing a ball without having to look at the throwing arm, or bouncing a ball repeatedly, like a tennis ball, or dribbling a basketball without looking.

When you handle something fragile, like the petals of a flower or delicate china, you know the appropriate amount of force and energy to exert. If your proprioception sense is impaired, though, via injury, lack of sleep, drugs or alcohol, or some other cause you may end up inadvertently crushing the flower or breaking the china by exerting inappropriate force or moving the items to the wrong place in relation to our body.

People with sensory disabilities often use improper force because of a lack of coordination of the proprioception sense. If you recall Steinbeck’s Of Mice and Men you may recall that the mentally disabled Lennie Small squeezed the rabbits too hard and accidentally killed them. Perhaps you have seen someone with a sensory disability slam a car door far too hard or “clumsily” drop things. Maybe you, yourself, have groggily arose from bed late at night for some reason and barked your shin on something you knew was there. This is all due to some problem with proprioception.

Have you ever ridden on a roller coaster or even on a very fast elevator as it descended from a lofty height to the bottom rail or the ground floor? That sudden sinking feeling, that almost nauseated feeling in the pit of your stomach, that feeling of vertigo? That is the vestibular sense reorienting your brain based on unfamiliar stimuli.

Have you ever been in a parking space and you were just about to pull out of it, but the car beside you beats you to the punch? In that split second while that other car is moving and your car is stationary, it seems like you are the one who is moving. Sometimes, there is a momentary panic while you double check that your foot is still on the brake, etc. That sensation of motion when there isn’t any? That’s your vestibular sense reacting incorrectly to trained input.

In simpler terms, the vestibular system includes the parts of the inner ear and brain that help control balance, eye movement, and spatial orientation. It helps keep you stable and upright. It’s the reason you can balance on and ride a bicycle or motorcycle, or swing on a swing-set. It’s the reason you can play hopscotch with all the one legged hopping, dive into a pool from the diving board, or even climb a ladder with confidence.

If you watch a 3-D movie, you may feel like you are falling or flying based purely on the visual stimuli and that is due to the vestibular sense.

People with vestibular issues may not know exactly where their body is in space. This can make them feel off balance and out of control, as if they are falling from a great height or flying up into the air like a helium balloon.

How does this apply to writing my novel?

If you have a character who has a sensory impairment, it could be important to understand the ripple effects of that sensory issue.

In a neurotypical brain, our consciousness plays about a million tricks on us every day to help us interpret and operate within our environment. Imagine you are in a large parking lot and about a hundred yards away, you witness a fender bender. A neurotypical brain will see the cars collide and hear the crash at exactly the same time.

But that is not reality. The reality is that the visual sight of the collision carried itself to your eyes at the speed of light, approximately 671,000,000 miles per hour. The sound of the collision reached your ears at the speed of sound, just 767.3 miles per hour. Your neurotypical brain took those two inputs which arrived at very different times and “synchronized” them together. That is what gets delivered to the parietal lobe of your physical brain for interpretation, evaluation, and action. It’s like having a little crossing guard inside your head every waking minute making sure all 7 senses play nice together.

If you have an other than neurotypical brain, the synchronization could be impaired or even non-existent, so that all seven senses arrive at the parietal lobe in real time, all the time. This is why people with sensory issues may not be able to ride a bike. Maybe they have no problem walking up a flight of stairs but walking down them is terrifying–or vice versa. Maybe they can’t dribble a basketball, or even tie their shoes with confidence because the refined proprioception sense that fine motor skills require is literally beyond their physical limitations.

Anyone who has trouble with proprioception or the vestibular sense could struggle with motor skills in a number of ways.

They may shut down in loud or busy environments. Imagine you are writing and your neighbor fires up the weed eater. After a few minutes, your neurotypical brain can classify that and filter it out. People with sensory issues cannot filter. ALL sensory input comes in ALL the time in REAL time without filter and without synchronization. This can lead to disaster at a sporting event, a noisy service station, an arcade, a bowling alley, or a trip to the mall where the sensory input is too much to cope with.

They may seem awkward and clumsy. An activity like running or even going up and down stairs may be hard for people who have difficulty knowing how their body is oriented and whether it’s stable. They may move slowly or avoid activities that are too challenging.

They may not know their own strength. Imagine you’re at the fridge, getting out a carton of juice you think is full—but it’s actually empty. You may jerk the carton up or even drop it because you used way more muscle strength than you needed. Like Lennie Small, sensory-related difficulties can make it tough to gauge movements for all kinds of tasks. People with sensory processing issues may break the pencil point because they’re writing too hard, rip a page when they just meant to turn it, or give overly enthusiastic hugs or handshakes.

Affected children may not like physical activities that other kids find fun. For example, kids with sensory issues may not feel safe on swings because they’re not getting the sensory input that tells them they’re securely seated. As the swing moves, they may have difficulty understanding how to shift their weight forward or backward to maintain balance.

They may be in constant motion, bump into things or seem out of control. When people with sensory issues don’t get enough feedback from the sensory system, they may exaggerate their movements so as to get the information they need from the environment. When they walk down a hallway, they may knock into the wall to feel more anchored. Students may kick their legs under their desk for the same reason. They may love physical activity like doing flips on a trampoline or just jumping up and down.

It is difficult to provide examples beyond those I have already provided since these two sensory functions are so individualized and internalized. If your character is in a situation or environment that directly relates to the sixth or seventh sense, you must include it by showing, not telling.

Hopefully, this article has provided 1) some fundamental understanding of what these senses accomplish and how they operate, and 2) some examples of how a character with a sensory disability (or sensory impairment) might be affected as a result.

With neurotypical characters, you may want to explore some reasons for other than baseline sixth and seventh sense actions or reactions. Stress, anxiety, fatigue, injury, or impairment due to drugs or alcohol can all greatly affect these senses. With other than neurotypical characters, it is fundamentally important to understand how their lives can be affected by this sensory disability and to describe how other characters perceive and interact with them.